If you are considering a project management career you need to ask yourself if you are a waterfall or an agile kind of manager.  If agile is your choice, you then need to ask yourself whether you would prefer not to be a manager in the traditional sense of the word, but rather a Scrum Master.  To make an informed decision you need to know the differences between the roles of Project Manager and Scrum Master and this post aims to explain these differences.

Note: Whilst a project manager role may be a little different in a waterfall environment (e.g., PRINCE2®) to that of an AgilePM environment, for the purpose of this post, the role has been generalised and no specific methodology has been referred to. 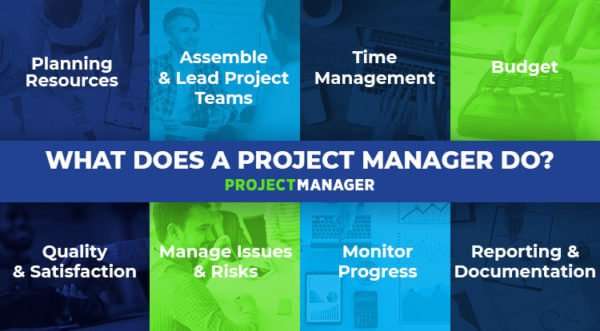 Project management focuses on 3 things: People, System and Organisation.  Project management is about bringing people with different skills together to develop them as a team.  An effective team means that the goals of the project can be met in time and on budget.

Project managers generally decide what projects their teams work on as well as which team members will work on which aspect of the project.  The project manager is a leader, acting as a frontline boss, making the role quite different to that of Scrum Master.

Responsibility of a project manager

A project manager is responsible for the daily management of a project.  They must be competent in managing the 6 main aspects of a project which are: Scope, Schedule, Finance, Risk, Quality, Resources.

A project manager would:

Traditional/waterfall approaches often require upfront design that is rigid and resistant to change.  Scrum, however, accepts and adapts to change as requirements emerge and evolve during product development. A Scrum team is self-organising and cross-functional.  Self-organisation increases the level of independence so there is no team leader to delegate tasks as there is in a traditional project manager role.  Issues are decided and resolved by the whole team, which makes the team highly flexible and adaptive.

The Scrum project progresses in a series of sprints.  On the first day, during the planning meeting, the backlog is created.  This is the team’s to-do list. Plans are made with the desired outcome in mind and the team then commit themselves to the individual features to be developed during the sprint.  There is no set task definition or set entry, validation or exit criteria as in the more traditional methodologies. Daily scrums are a way of synchronising the work of each team member by discussing the work that has been completed, any issues that arose and what needs to be done next.

Success or failure of the project

A traditional project manager would assume responsibility for the success or failure of the project and would delegate tasks to individual members of their team.  In a Scrum team, however, there is no one person responsible for the success or failure of the project.  Being self-organised, each team member takes ownership of a specific task, and it is therefore the whole team that becomes responsible.  In a Scrum team, the team is not managed by the Scrum Master, but rather manages itself with daily meetings, iterative inspections, and adaptations to the product. Scrum is the most popular Agile approach to project management, but a Scrum Master is not an Agile Project Manager.   As an Accredited Scrum Master , your most important responsibility would be to manage the implementation of the Scrum framework across the whole organisation.  You would not delegate tasks to your team members as a more traditional project manager would do.  You would discuss what needs to be produced and the team would decide amongst themselves who will work on what.

Transparency and visibility are of the utmost importance in a Scrum team, so each member puts their name to the task they are working on and by so doing they become accountable for that task.  This encourages each member to learn from each other and problem-solving skills are enhanced for both individual and team. As well as this, as I said earlier, the way that a Scrum team works means that no one person is responsible for success or failure of the project.

Responsibility of a Scrum Master

The Scrum Master would:

Given the nature of the Scrum team, there is hardly any overlap between the Scrum Master’s role and that of a project manager.  The latter is more of a command-and-control role.  In contrast, the Scrum Master, is a servant leader who makes sure that individual team members have everything they need from the start, making it more of a coaching role. It is the Scrum Masters’ responsibility to make sure that everyone involved with the project is properly applying Scrum theory, practices, and values.

As you can see, there are many differences between the role of a Project Manager and that of a Scrum Master, and I hope this post will help you decide which is for you.